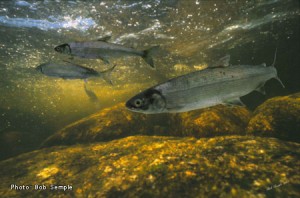 The Atlantic whitefish is a coregonid species, which is classified as a subfamily within the salmonids.

Its physical resemblance to the more common lake whitefish originally delayed its identification (COSEWIC 2010). Although, previously known as the Acadian whitefish, Sault whitefish, round whitefish, and common whitefish (Edge and Gilhen 2001), anatomical comparisons and genetic analyses have confirmed the Atlantic whitefish as a separate and distinct species (Bernatchez et al. 1991; Murray 2005; COSEWIC 2010).

The Atlantic whitefish has silver sides, a white belly, and a black, dark blue, or dark green back (Figure 1). It can be further identified by its deeply forked tail and the presence of a fleshy adipose fin, which lies along its back, between its dorsal and caudal fin (Scott and Scott 1988). Land-locked individuals reach an average length of 20 to 25 cm, significantly smaller than anadromous individuals, which average 38 cm in length but can reach up to 50 cm (Bradford 2000). Anatomical comparisons conducted by Hasselman et al. (2009), showed that three species-specific characteristics consistently distinguished the Atlantic whitefish from the lake whitefish. The Atlantic whitefish was found to have shorter pectoral fin lengths, a greater number of lateral line scales (Atlantic whitefish: mean = 94; lake whitefish: mean = 77), and a more terminal mouth position.

Although the remaining Atlantic whitefish population is now only found within the Petite Rivière watershed, historically, an anadromous population was also known to exist in the Tusket-Annis watersheds in Yarmouth County, Nova Scotia. However, since there have been no reported Atlantic whitefish sightings in the Tusket or Annis rivers since 1982, this population is believed to be extirpated (Bradford et al. 2010). Occasional, isolated sightings have been reported in other coastal areas, including the Sissiboo River (in 1909) (Scott and Scott 1988), Halls Harbour (in 1958) (Edge and Gilhen 2001), the Lahave Estuary (in 1995 and 1997) (Edge and Gilhen 2001), the Medway River (DFO 2011 Pers. Comm.), and the lower reaches of the Petite Rivière system, including Fancy Lake (DFO 2006). Although it is possible that the species’ range had already been reduced prior to its identification in 1922 (Huntsman 1922; DFO 2004a), these individuals were likely remnant members of either the Petite or Tusket-Annis River populations (DFO 2006).

YouTube video of Atlantic White fish captured by Andrew Breen in 2014. In 2015 there were no Atlantic whitefish to be found.

Source: The above information is taken from the Bluenose Costal Action Foundation website.

Write to the new Fisheries Minister, Hunter Tootoo, urging him to exert pressure on DFO Maritimes to start a captive breeding program and implement range expansion of the species. Extinction is very likely if they are left to fend for themselves in the Petite Riviere watershed. In 2013, Chain pickerel were discovered in Hebb and Milipsigate Lakes, and now only 3 years later they can be found throughout the system. Chain pickerel is an invasive fish and, along with Smallmouth bass, are predatory fish that will eat Atlantic whitefish and other fish.