“Earth provides enough for every man’s need, but not every man’s greed.” – OccupyWallStreet sign

PetroWorth Resources, an Ontario-based company, has approval to drill an exploratory oil/gas well at MacIsaac Point, West Lake Ainslie, Cape Breton, 600 metres from the shoreline and 75 metres from a dwelling.

If this well is allowed, we feel it will set a precedent. Nowhere in Nova Scotia will be safe from oil/gas exploration.

Some of the risks associated with oil and natural gas drilling at Lake Ainslie:

Canadian Centre for Policy Alternatives released a new report by Ben Parfitt of the BC office on November 9, 2011: Fracking Up Our Water, Hydro Power and Climate: BC’s reckless pursuit of shale gas.

Industry and government promote natural gas as a “green” alternative to conventional fossil fuels that will bring much-needed jobs and revenue to BC. but this study reaches the opposite conclusion. Green resources in high volume – water and hydroelectricity – will be required to produce more and more dirty energy, in the form of a greenhouse gas emitting fuel. Consider the following excerpted from the executive summary: 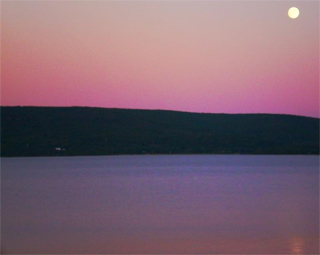